As I sit in a coffee shop in Hudson, New York—“the trendiest town in New York State”—it’s hard not to think of my new home, two hours north of New York City, as part paradise, part gay remix of the good ol’ colonial way.

As I sit in a coffee shop in Hudson, New York—“the trendiest town in New York State”—it’s hard not to think of my new home, two hours north of New York City, as part paradise, part gay remix of the good ol’ colonial way.

Where property values have inflated for working-class folk of all colors, pushing them over-and-out the window sills of their quaint farmhouses; where Federalist walk-ups hooked up to IV drips are a common sight; and where Main Street staples, like Joanne’s Hair Hut and Keisha’s Chicken Shack, have been replaced by pricey displays of a new culture filled with microfoam lattes and French-linen prairie dresses. I can’t help wondering: how far have we actually come?

And what is my role in this gentrifying process?

I am both a part of the model gentrifying class—the gays—and a part of the group typically displaced by said gentrifying class—the blacks. I grapple, then, with an identity that keeps me in the weeds of common culture at both of these intersections. The gay “revitalization” of towns like Hudson seems to me a confusing hybrid of gentility typically possessed by the marginal classes, but clean-cut, impeccably connected and speaking in the same language as all-powerful white men tend to: divide, conquer, add capital, flip property, collect dividends.

The ‘colonial way’ has exploited colored populations since the arrival of a few dozen Englishmen to the shores of Virginia in 1607.

Does that make me something of a black gay colonizer? And if so, well, how can that be?

I do not adopt the term colonizer lightly. The colonial way has exploited colored populations since the arrival of a few dozen Englishmen to the shores of Virginia in 1607, where they’d name the first American settlement after their king. But these colonizers were not—as one might suspect—just vicious cheats, guardians of the self or missionaries of a fabricated “culture” that would destroy all others in its path.

In that coffee shop, I have a revelation: this town is overrun by white gay men—men who lost leases in New York City’s Chelsea and Tribeca neighborhoods towards the end of the ’80s, before riding trade winds of antiquing and home restoration up the Hudson River in the ’90s. This is the colonial formula at its purest: parasitic landowners borne from the accumulated wealth of their ancestors—with cultural capital to boot.

Colonizers act badly, then legitimize their behavior with crafty fantasy narratives. These narratives have a clear message. From the Disney princess named Pocahontas who falls in love with an English “visitor” named John Smith, to the real-life story of children being drugged and kept in cages while white newscasters sell transitory stories about “illegal aliens” to a frightened and uninformed American public: once we have overthrown a thing, we own it. This is, and always has been, the backdrop.

The gays would be no less colonial. In fact, to keep emphasizing their historical oppression—whether over cocktails or in community board meetings on the East and West Coasts—is to overlook their massive accumulation of power in far-reaching places. As “homosexuality” was removed from the American Psychiatric Association’s list of disorders in 1973 and gradually decriminalized, many gays climbed quickly into an upper-class lifestyle: tennis and theatre; writing retreats peppered with sex parties; pride parades; and pedigrees biting at the poolboy’s tanned ankles. 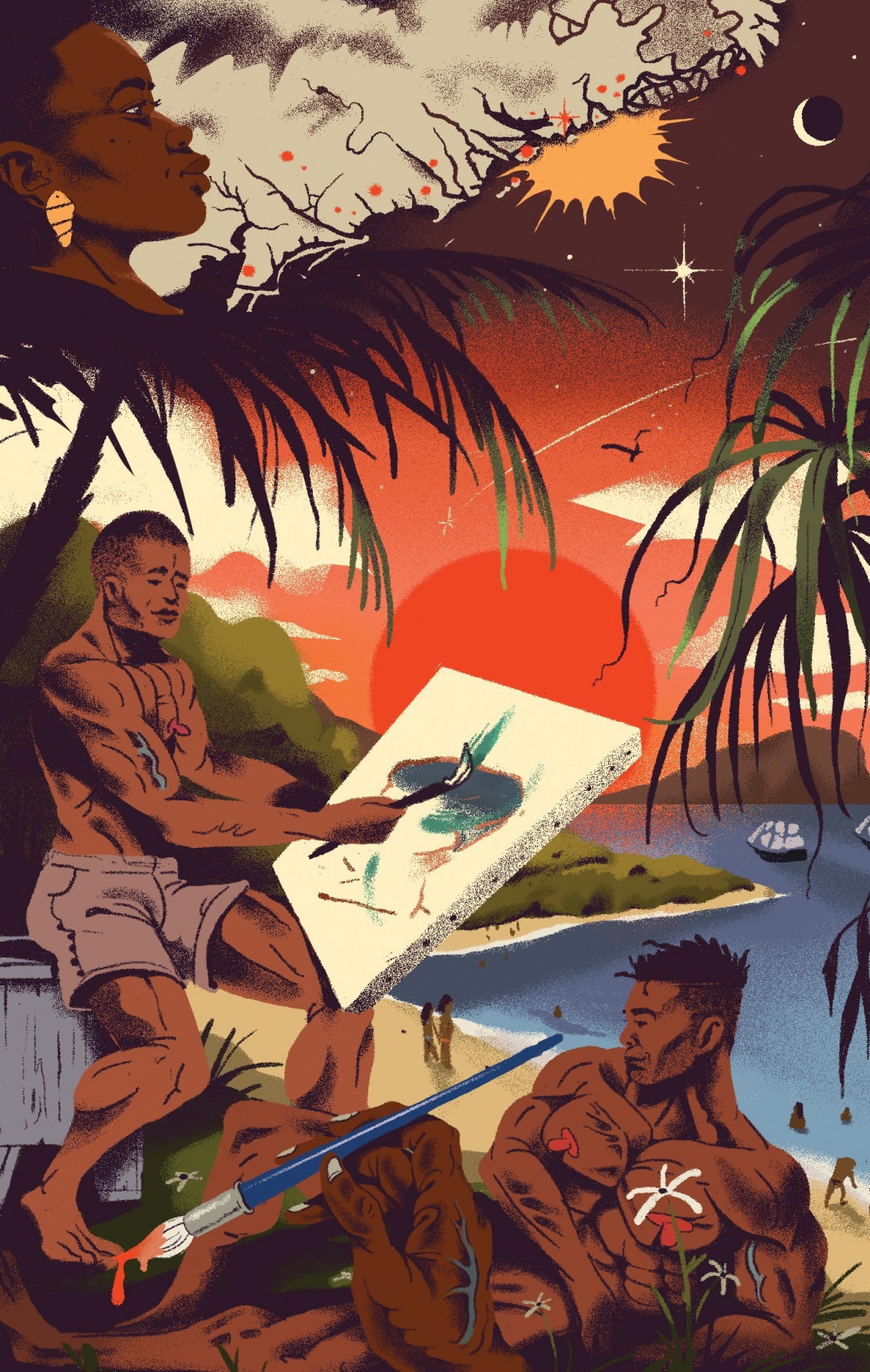 “Gayborhoods,” like Palm Springs and Provincetown, were never meant to be inclusive to all gays, though. They were to be a Jamestown 2.0, and the universally-accepted language was to be white gay male culture.

These once vibrant and gritty neighborhoods, where identity was formerly expressed through street-level sexcapades on after-dark ho strolls, started to lean less on their inhabitants’ outsider narratives, and more on their own colonizer’s sensibilities. The culture bearer became king, quickly persuading the masses that he should have ultimate influence over the land, that his culture could veto all others. ’Tis how the gays converted the masses.

But black queers know nothing of their own gay utopia. Truth is: there have been radically different purposes for black migration and separatism over the years. W.E.B. Du Bois coined it, back in 1897, a “double consciousness.” Du Bois theorizes that the black man is always looking out of two sets of eyes—always conscious of his “two-ness” as black and as American.

“Double consciousness” has become a catchphrase in the community, but it is also problematic. To “attain self-conscious manhood, to merge his double self into a better and truer self…to be both a Negro and an American” is, for black American men, to feel complete exhaustion and outrage. White boys have no need for two sets of eyes to see the horrors of the world they’ve created.

But two sets of eyes also allow for two sets of values. Witness the various stages of corporate climbing; listen to the casual conversations over coffee in towns like Hudson: the gays know that being an American means owning a piece of the apple pie. Beyond this drive for ownership, there aren’t many values, nor is there much morality.

And yet, I am also conscious of my African ancestors’ values—their communalism; their spiritual communication with the natural world; their preservation of the environment. I can see opportunity out of each of my four eyes.

I will happily paint myself red, white and blue on top of black, and bake a colony right on top of theirs: Jamestown 3.0. In my new colony, the upper crust of black queer free men is flaky with a black-American life-work balance, and our multiple consciousness gives a far richer, deeper texture than Du Bois’ double consciousness.

Catch Us If You Can

Several large traditional financial institutions—once viewed as dinosaurs stifled by archaic legacy systems—are beginning to get some skin in the innovation game too.

Walt Disney had a vision for tomorrow—and the means to sell it.

A mid-century example of viral marketing, Paint by Numbers was also an accidental object lesson in creativity and ownership.

They Are the Last

A rare peek at the solitary life of a lighthouse keeper, whose work will soon be completely replaced by automation.

Financial markets are more vulnerable than ever to another fast, unexpected, quant-driven fluctuation.

Create an ecosystem with a particular opportunity, and a suitably talented person will shape something new.