Digital art challenges notions about consumption, and yet its market has evolved with a familiarly distorted sense of value.

Digital art challenges notions about consumption, and yet its market has evolved with a familiarly distorted sense of value.

igital art challenges notions about consumption, and yet its market has evolved with a familiarly distorted sense of value.

“This weird art that some people are doing, this weird art that is sold for high prices—the Cryptokitties that sold for $100,000—that seems to be what the art world wants to talk about,” says Beatriz Helena Ramos, a New York–based artist and co-founder of  DADA, a social network for artists. “[But] unless you are talking about the super high-end market, there is always an expectation that what an artist is doing is not a priority or of value.”

With extensive experience as an animator, Ramos knows this firsthand. Citing the $260 billion market for animation and digital effects, she bristles at the concept of Patreon: “This idea of ‘artists don’t have money, and they’re not really creating value, but what they’re doing is cool, so let’s help them out.’” 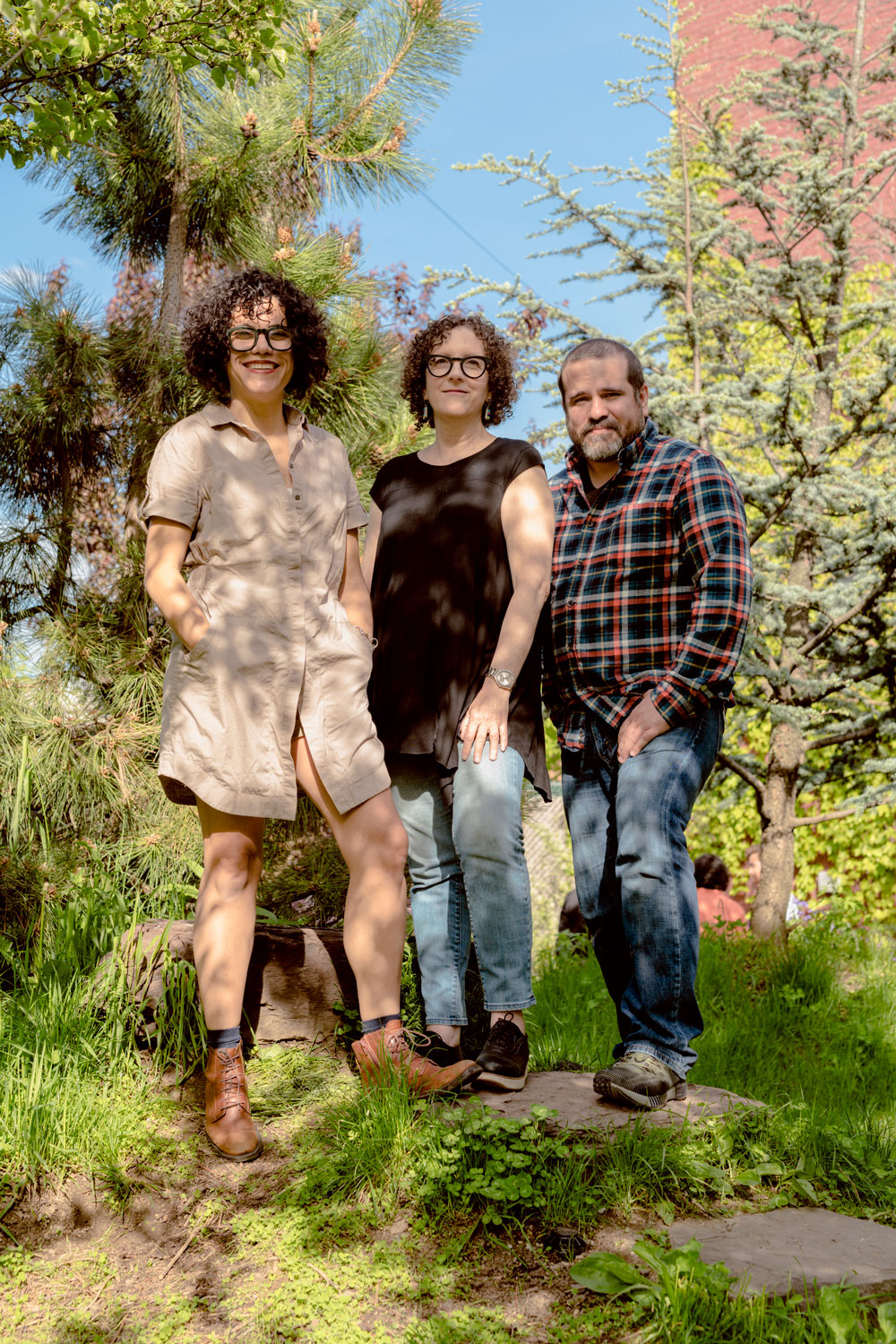 The better way, she believes, is to get artists talking—with one another and with potential collectors—inside a supportive community that runs off the sale of the work. To that end, DADA has recently announced an equity crowdfunding campaign with SeedInvest, with a goal of raising $1.5 million to further their idea of a new artists’ economy.

DADA began in 2012 as a collaboration among Ramos, writer and creative director Judy Mam, and software developer Abraham Milano. (Its name references the early 20th century avant-garde art movement, which Mam says is an inspiration.) Today more than 160,000 registered users worldwide use the blockchain to draw, share and sell their work.

Its first iteration was a Facebook app, which launched in 2014. After initial attempts to monetize the artworks fell short, blockchain was a natural progression, says Milano. They received funding from ConsenSys Ventures, among others, and advice from Larva Labs’ John Watkinson and Matt Hall, who had recently launched the unique, algorithm-generated characters Cryptopunks.

Now each drawing created with DADA’s online tools is tokenized and can be purchased or licensed with Ethereum cryptocurrency. The work is assigned a unique code that can track primary and secondary sales, as well as rentals, so the artist will continue to benefit as it changes hands, and at potentially higher percentages than they would through the traditional gallery system, says Ramos.

The money is not big money, by art world standards—most pieces in the platform’s first offering last year, sold for around $10 each. “But that’s not the point,” says Ramos. “What we’re saying is that there is value, and the value is cultural and psychological and emotional and social, and all these really truly priceless things—and there is also monetary value.” 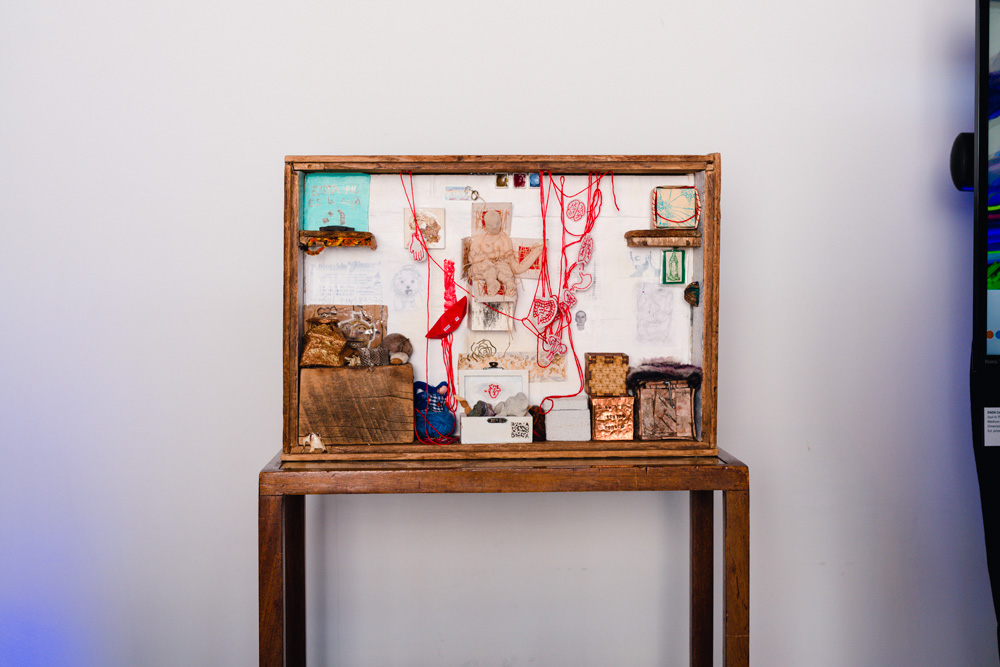 DADA’s Soul in the Machine includes this collection of 2-inch memento boxes, one from each of the 19 artists who created the work.

The Core of Art

Some of the imagery shown on DADA comes across as primitive. “We give these shitty tools,” says Ramos. “And especially now that there are these amazing drawing apps and Photoshop and these tools are so rudimentary…we take [users] back to the ‘80s, and to that software.” For the super-users, the medium makes sense.

“The very easy interface captured me immediately,” says Serena Stelitano, a farmer-housewife from Tuscany, Italy, who came to DADA through Facebook, and quickly became an active—often daily—user. “In DADA you have to create art almost as in real life, with just a canvas, no layers, some pens,” she says. This allows a wider selection of creative minds to use drawings to communicate, which is in my opinion the platform’s juicier achievement.”

Stelitano had shared some of her artwork on social platforms in the past, “but didn’t like the falseness of the likes exchange,” she says. “I was looking for a place to express myself without censorship, too, and away from the hyper-sophistication usually seen in digital art tools.”

The idea of monetizing the works initially was worrisome for Stelitano, who was “very concerned that it would ruin the experience. But it inspired new roads and promoted our community’s cohesion, instead,” she says. “Some of the artists on DADA live in quite poor countries, and one of the goals of the platform is to create a basic income for our members.”

One of DADA’s most prolific artists is Marìa Garcia, a hairdresser from Cumaná, Venezuela, who has created nearly 11,000 drawings since she first encountered the Facebook app. The experience has given her “validation I have never found elsewhere,” she says. “It’s an entire family of artists from different countries.” Her participation has also provided what she calls “a distraction” from the political and economic insecurity that she is facing in Venezuela.

Garcia reached out to the founders at one point, to ask about proceeds from the sale of her work that had not yet been transferred to her digital wallet. Mam remembers the request, reflecting on the urgency of the circumstances. “She said, ‘I am working at a car wash, and I’m wondering if there is any money left,'” says Mam. “With [the] $60 [we sent], she could live for three months!”

Video from Simply María: The Art Of María García, featured at the Contemporary and Digital Art Fair (CADAF) in May.

In early May, at the Contemporary and Digital Art Fair (CADAF) in New York City, DADA showed a work called Simply Marìa: a 360-degree digital projection of Garcia’s drawings—many of sports cars, or dream sequences—animated by Ramos.

When the founders called the artist before the show and sent through the animation, it ”[brought] tears to my eyes,” says Garcia…“It’s a gift for me to know that other people will see my drawings.”

The founders’ goal was to give Garcia the same access enjoyed by well-established and well-connected artists, says Ramos: “What we wanted was to make a political statement, that [Garcia] could be among all these high-tech people,” says Ramos. “It is digital art and it’s imaginative…it’s the core of art.” 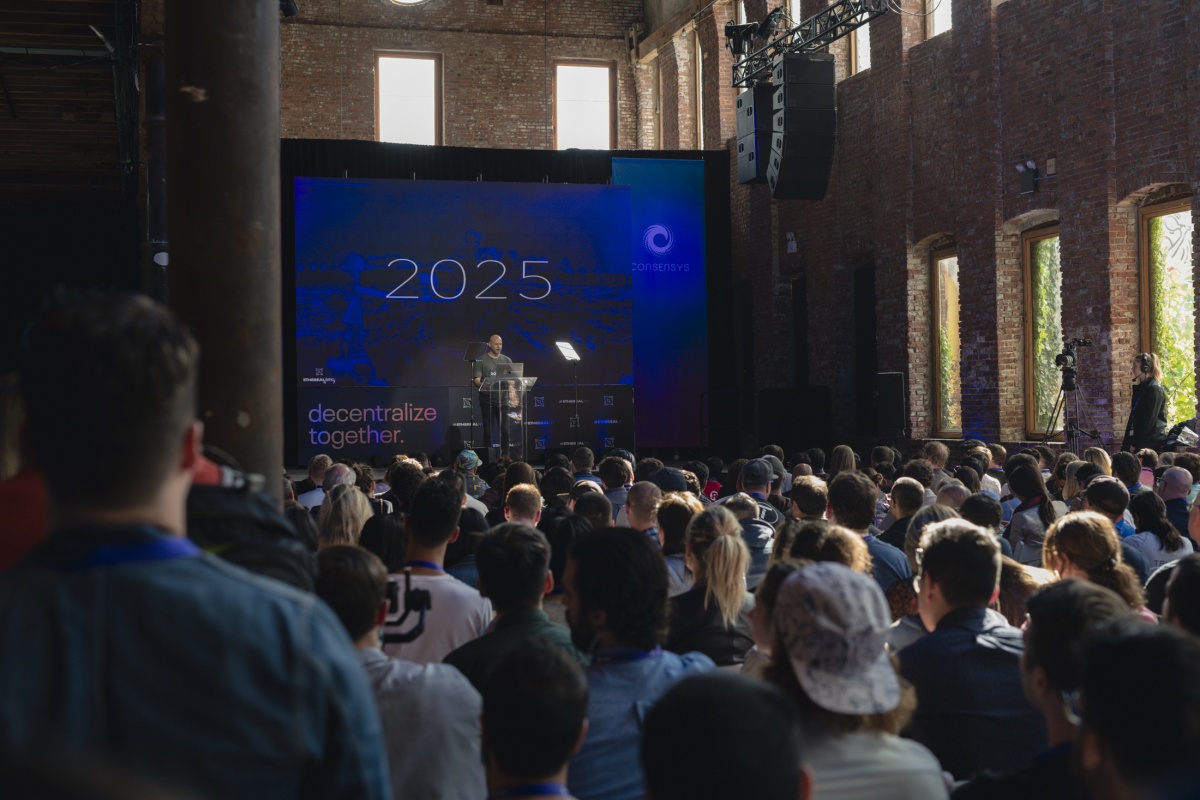 Joseph Lubin, co-founder of Ethereum and founder and CEO of ConsenSys, introduces the art auction at the 2019 Ethereal Summit.

Soul in the Machine

Digital art has gained prominence, in recent years. As Ars Electronica director Gerfried Stocker told Hacking Finance earlier this year, “Media art is today’s contemporary art, so the art world is going to need to find a way to deal with it.”

For a lucky few, there is also a financial boom, as is evidenced by the high prices fetched by Cryptokitties, as well as other headline-makers such as Kevin Abosch, whose digital photos of potatoes and roses have sold for millions.

“When art becomes exclusive, elitist, people to think of it as a very small niche,” says Mam. “No one thinks that there are millions of artists in the world who are talented and even more who love art.”

The goal of DADA, she says, is to open up a “sliver” of the art market, “so you can discover an artist while sitting at home and that artist can have a collector without leaving their place.”

In March, DADA held its first live drawing auction at the Radical x Change conference in Detroit. Sight Unseen was a collaboration between 17 artists, in 10 different countries, who each took a turn creating it, in real time, during the auction’s two-hour window. The format of the auction was also an experiment: it was a channel auction, a combination of an English auction, which ascends from a lower opening price, and a Dutch auction, which descends from with a high asking price. (Channel auction participants commit to the minimum price and then have the option of purchasing at the maximum, at any point.)

The work sold for $3,125, and it will be split between two people, who will co-own it. “Seeing artists create something together predisposes people to say ‘We can share the art,’” says Ramos. “Each of them paid their highest bids, so that the artist could get more.”

At the Ethereal Summit on May 11, 19 artists—including Stelitano—teamed up to create another collaborative piece, Soul in the Machine, as part of the live art auction to close the event in New York City. DADA put up on the block a QR code of the final drawing, a video loop of its creation, and a box of meaningful objects sent in by each artist—representations of both the virtual and the real.

That piece did not sell. “We feel this is the wrong approach for this emerging market, with a traditional English auction where the focus is on the price and not on the art,” says Mam. “In order to create a market, we need to make people fall in love with art on the blockchain, and pure speculation is not the way.”

Mam, who calls the experience “sobering,” wonders whether the outcome would have been different, after the cryptocurrency’s huge increase, days later. But she is proud of the artists’ commitment and future projects they are planning together.

DADA has so far facilitated about $14,000 worth of sales for its artists. But here again, Mam stresses that it’s not about the money, but about the idea:  “If, as an artist, you were told that you would have the minimum that you need, the baseline that it’s enough for you, then you would do it—any of us would do it,” she says. “At the end of the day, how can we make that possible for as many people as we can?”

When Crisis is Fertile Ground

Our survival is tied to a more sustainable food supply. Amid the uncertainty, agritech leans in.

Digital art is today’s contemporary art so the art world will have to find some way to deal with it.