Each one of us is a generator and arbiter of data, said JP Rangaswami Wednesday night, in a keynote that kicked off Hacking Finance’s flagship event, in Méribel, France.

Each one of us is a generator and arbiter of data, said JP Rangaswami Wednesday night, in a keynote that kicked off Hacking Finance’s flagship event, in Méribel, France.

ach one of us is a generator and arbiter of data, said JP Rangaswami Wednesday night, in a keynote that kicked off Hacking Finance’s flagship event, in Méribel, France.

Even more important, he said, is what we can do as a collective, by correctly harnessing that data to solve problems, tap new resources, and empower people who might otherwise be left behind.

“If we could actually build communities of people who brought the data that they were sensing together, then value could emerge from that,” said Rangaswami, and one of the most useful elements for that value could be in the reduction of waste.”

Each July, Hacking Finance brings together a select group of startup founders, investors, academics, and thought leaders to the French Alps for several days to discuss the challenges facing financial services, and, more broadly, how our shifting concepts of work, progress, income and success impact the way that we think about who we are, and where we are headed.

Rangaswami opened his talk by comparing our concept of humanity to that of the the galaxy, or the genome: We have moved heaven and earth to understand a tiny fraction, forgetting in the process that vast expanse remains unknown. “Everywhere we go, we discount a whole group of people,” he said. “The rest of the people that we assume to be inert, inactive or passive are actually extremely important.”

As we wrestle with concepts of work, employment and value, he said, we also must “rethink or at least frame differently what it means to be us, as humans, starting with identity and connected to how we consider work and what we consider income.”

We must move beyond the concept of individual identity and imagine each of us as part of an ecosystem, he suggested: “Plants evolve in ecosystems with their pests and with their parasites.” We can evolve away from hierarchies and values placed on titles and incomes, and consider the way in which each contributes to the whole: “I got irritated and still get irritated when people look at my wife and say that she is a housewife as if the term is without productive value,” he said. “We’ve been married for 34 years and there is nothing I could have done without her.” If the premise is that no one of us acts alone, then the key question becomes: “How do we make sure that human beings are valued, because if they have purpose and dignity, then many of the things that I worry about would start getting easier.”

Which brings us back to the data. The technology we carry in our back pocket enables each one of us to act as sensors—to respond to and report back on the environment around us. That, in itself, is value, he says, even if in many ways it has not yet been monetized. Citing the work of Clay Shirky and Thomas Malone, he talked about communities of people who create value by responding to what they are sensing, whether that is Waze or the work of outsider artist Ben Wilson, who responds to the problem of fossilized chewing gum littering the London streets by turning the globs into paintings.

The free market will enable certain people and organizations to build different-size sensors, he says: “Some, like in the open source community, want to become infrastructure level sensors, and some want to be thousand-pound gorilla sensors.”

After the presentation, Rangaswami responded to questions posed by Anthemis founder Sean Park. He elaborated on the changes he is observing in the workforce and shared how he believes our education systems need to shift to address the challenges ahead: “We appear to have industrialized answering rather than questioning,” he said, citing Picasso’s well-known statement about the uselessness of computers, which can only give answers. What we need is a system that celebrates and rewards failure, resilience, adaptability. “The jobs of today won’t exist tomorrow, but I’ve had to reinvent myself so many times,” he said. “It’s about lifelong learning.” 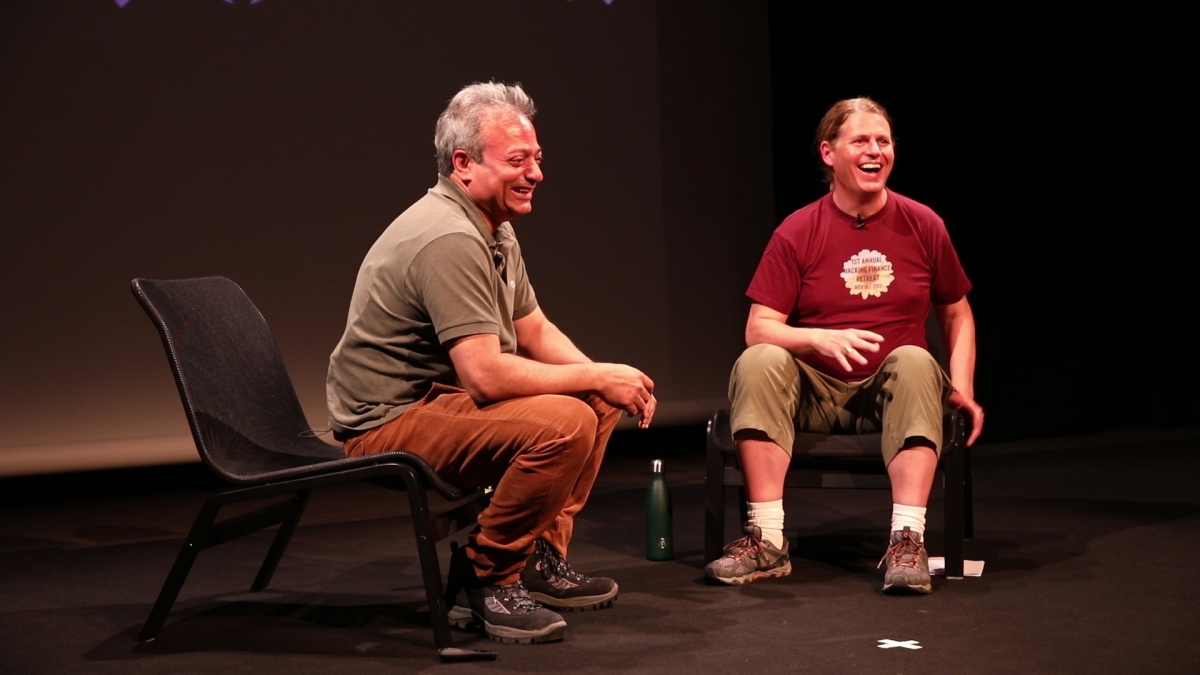 AHFR18 Q and A with JP Rangaswami & Sean Park

The impact of technology is tough to see in real time, said Rangaswami, citing Roy Amara’s well-known theory that we overestimate effects in the short run and underestimate them in the long run. “I remember in 1980, when I started in the UK,  people told me that the paperless office was like the paperless loo,” he said. “I watched the next 40 years, saying, ’There’s still paper in the office…It takes time.” Valuable time, he allows, that can help us create the change that is needed.

Change is needed to maintain a view of finance like his, which is far broader than the means of currency and instruments and banks: “We are not trying to create new things as much as we are wanting to take very old things, like trust, from an environment where everyone lived and died in the same place to an environment where there is migration and there is connectivity,” said Rangaswami. “How do we scale that? Well, if you can give people purpose, anythings can be solved. If that purpose is something that you can discover easily, then many things can get solved.”

The 8th Annual Anthemis Hacking Finance Retreat in Méribel, France brought attendees into the mountains and away from the day-to-day grind of transforming financial services.

Carlota Perez has inspired students of economic theory—and a who’s-who of venture capitalists—to consider where today’s innovation sits in the context of what she calls a “a great surge.”