A Peent in the Wind

Thursday, 30th of January, 2014. 4:30pm, London time. Somewhere out on the internet, a pioneer stakes their land. Out of this cold and digital soil, the shoots of a new currency are set to rise. Teased out of the earth with promises of greatness, of fat little birds and their cute little beeps, this coin is poised to be the Next Big Thing™.

Thursday, 30th of January, 2014. 4:30pm, London time. Somewhere out on the internet, a pioneer stakes their land. Out of this cold and digital soil, the shoots of a new currency are set to rise. Teased out of the earth with promises of greatness, of fat little birds and their cute little beeps, this coin is poised to be the Next Big Thing™.

hursday, 30th of January, 2014. 4:30pm, London time. Somewhere out on the internet, a pioneer stakes their land. Out of this cold and digital soil, the shoots of a new currency are set to rise. Teased out of the earth with promises of greatness, of fat little birds and their cute little beeps, this coin is poised to be the Next Big Thing™.

It’s hard to pinpoint the exact moment that a joke becomes a meme. Is it the first time it’s retold? Is it the first thousand times? There’s no logic to the process. You just know it when you see it.

Peent, for those one-hundred-percent of you out there unfamiliar with the meme, is the noise made by the American Woodcock. It is a strange-looking North American bird and the target of many a hunting expedition.

The bird is intrinsically humorous. There’s its name for starters: woodcock. There’s the absurdity of its official call: peent. Then there’s the way its entire plump little body convulses when it calls out. Add to this the fact that this little dude can dance like there’s no tomorrow and you have a recipe for the utmost amusement. This bird was poised for greatness. It’s no wonder, then, that deep in the dark recesses of the internet one cold winter’s afternoon, a new meme cryptocurrency was being born.

The story begins in 2014. I was hanging out, as one does, on an obscure chatroom dedicated to cyberpunk enthusiasts. This was the crust of society. The lower crust. You know, the dirt that develops around windowpanes. To this day, I stand by the fact that we weren’t, that we aren’t, bad people. Rampant file-sharing? Yes. Building antennae to steal WiFi half a mile away? Sure. Just the usual, casual stuff.

Most of us were simply bumming around, talking about science fiction: Ghost In The Shell, Blade Runner, things like that. Everyone except me was extraordinarily proficient technically. We all ran open-source operating systems. We all loved the film Hackers.

Our rally point was ‘cyberpunk sci-fi’: the absurd crossover between Star Wars and film noir, with a dash of Asimov thrown in to spice things up. As Mike Pondsmith, the genre pioneer, put it: ‘cyberpunk isn’t about saving humanity, it’s about saving yourself’.

Nowadays, however, the group has drifted from a bundle of nerds that discuss sci-fi noir to a bundle of friends with a shared love of sci-fi noir. In 2018 you’d be hard pressed to find us actually discussing the topic at hand. We share pictures of guinea pigs. We’ve even met, some of us, out there, in the real world. I would go to one of their weddings…if I was invited.

But in 2014 it was all business. While the rest of us blasted electronic music and watched livestreams of police riots, one member of the chatroom – whose name is now lost to the ages—dreamed of greater things.

The hot topic at the time was Dogecoin. Inspired by the phenomenon of Doge, one of the most popular internet memes of the year, Dogecoin was created on December 8th, 2013. It was the fun-time jolly counterpart to Bitcoin.

The dreamers among the dirty dared to believe that they might be the next great crypto-father. But they couldn’t do it alone. They had to tap into the wisdom of our rag-tag bag of cyber-miscreants.

“What’s the next big meme?” they asked.

Poised and ready, armed with this nugget of information, https://reddit.com/r/peentcoin was created. It was a space where a community might blossom; where the majesty of the American Woodcock might burn itself into the retina of the Internet’s all-seeing eye.

But the time wasn’t right. Not yet. Like any good landowner, this intrepid wannabe Satoshi recognized a need for the market conditions to mature. The meme had to popularize. The virus had to spread. Only then, only then could the mutating begin.

And then it happened. Peent was ready to blow. This meme was at its boiling point. It just needed one more YouTube video, perhaps a few well-placed message-board threads, and this baby was ready to go to the moon…and back. The tumblr posts were accelerating. The fanart of the American Woodcock was multiplying. We just needed one solid catalyst to push it over the edge.

Two months after the creation of Peentcoin HQ, it came and was our ruin. 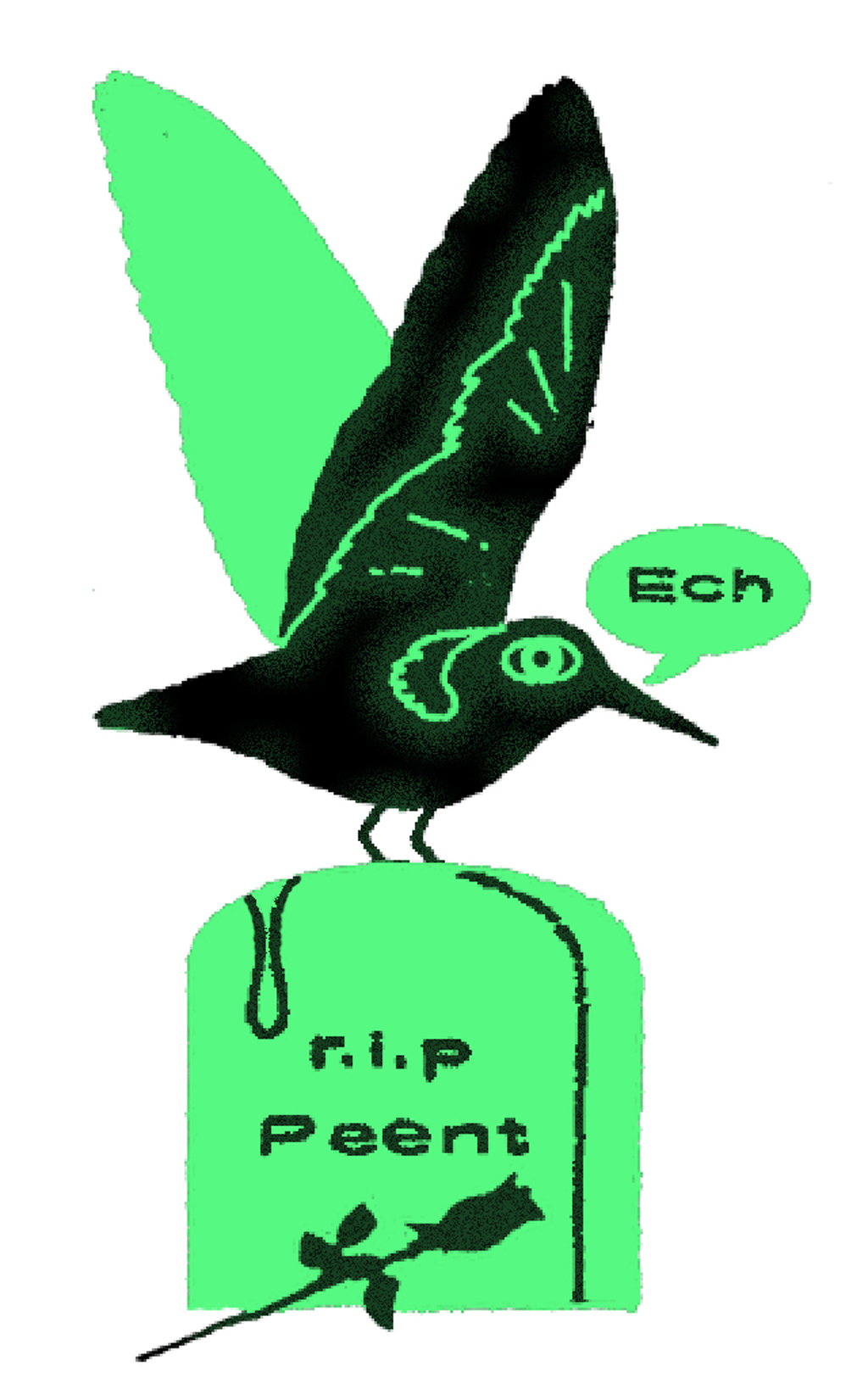 On 24 March, 2014, a YouTube user by the name of Halomaniac1234 released ‘The American Woodech’. In it, the American Woodcock we all knew and loved was peenting its peents to the world. It was beautiful. Mesmeric.

But there was something off. Those weren’t peents. They were echs. Worse still these grunts of disgust, these echs, were the voice of YouTube star JonTron. In one foul video-editing stroke, Halomaniac1234 had crushed all hope of Peent becoming a real meme. There’s nothing more disastrous for a meme than to be subsumed by a larger meme – and JonTron is large. Every video he makes seems to worm its way into the space between the brain folds of the online populace.

Jon, famed lover of birds and YouTube star, whose voice had supplanted the adorable peents of the woodcock, was never going to be beaten by the obscure peent meme. In a cruel irony, the pretender to the throne of Peent was a bird-based meme unto himself. (A green-cheeked conure parrot is a regular visitor to his main channel.) His spluttering, the famous ‘ech’ that replaced the adorable peeping of the woodcock, is now a brand, daubed all over his line of merchandise.

This was an incontestable knockout blow. The replacement of ‘peent’ with ‘ech’ was a pinpoint strike so precise, so surgical, that it couldn’t possibly have been planned. This was a mark not of genius, but of providence.

And so it was, that on 24 March, 2014, Peent died along with all of its dirt-fueled dreams. The meme that was to be the shining light of the animal meme kingdom was gone. The cryptocurrency that was to ride on its coattails would never see the light of day. Only the ruins of https://reddit.com/r/peentcoin stand as a testament to what could have been.

If you try to enter, you will be blocked. That corner of the Internet is private. Nobody knows what goes on behind the gates. Nobody, that is, except for the creator of Peentcoin, and me.

→ Reminisce with us about your favorite cryptocurrency of yore

What happens when you design a bitcoin product for someone other than a finance bro? Deana Burke made it her mission to find out.

How To Train Your Algo

A few weeks back, I came to the profound realisation that YouTube thought I was a blithering idiot.

The Battle of the Wizards and Planeswalkers

From spell-slinging to deal-making, there are many lessons from Magic: the Gathering that apply to venture investing.

To some people, batteries are used to power electronics. To others, they’re the next wave of transportation. To some, they’re for strapping to your face to reach hitherto unparalleled levels of mental capacity.

It’s hard to believe, but the solution to the free-for-all of the internet really is by invitation only.